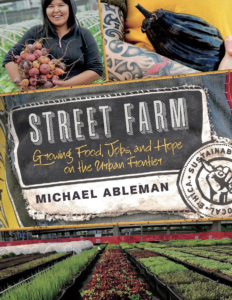 I turn to see a local Hells Angel yelling to no one in particular, shaking the chain link fence at our corner of Hawks and Hastings in Vancouver. He’s looking into the parking lot where I’m working, now a verdant urban farm.

The street where he’s standing in his tattoos and leather runs elevated above our half-acre. Passersby cannot help but look down into the incongruent goings-on at Sole Food Street Farms. Every day a few among the throngs stop to gawk in amazement at what had long been an unsightly expanse of asphalt but is now a full-on agricultural enterprise bursting with crops, smack in the middle of one of the most infamous neighborhoods in the world, Vancouver’s Downtown Eastside, the Low Track, ground zero, home of the term “skid row.” Ours is the poorest postal code in the country and holds the dubious distinction of having the highest rates of HIV and Hepatitis C per capita in North America. It is also home to one of the continent’s highest concentrations of open prostitution.

And if food is the next thing, man, drugs have been the thing until now. In fact, to say they’ve moved on would be wishful thinking. Wind your way through the neighborhood between Carral and Columbia Streets on East Hastings, nearby, and you hear “rock, powder, down” repeated over and over, to no one in particular. It’s a mantra in an open offering of crack, powder cocaine, and heroin to everyone who walks by. And it kills; there are more drug-related deaths here than anywhere else on the continent. Every kind of dope is available here, along with an amazing array of stolen bicycles, suitcases, cell phones, clothing, shoes. And in a back alley, a cheap hotel room, or the comfort of your car, any number of illicit sexual experiences are on offer.

All of this squalor exists in the heart of gleaming steel and glass high-rises, pristine parks, art galleries and restaurants, as the shiny new Mercedes-Benzes, Lexuses, and BMWs ply the streets of what is considered North America’s most expensive city. While Vancouver’s prosperity is celebrated, its concentration of poverty and raw desperation endures in the midst of the polished and the preened.

Street Farm is the inspirational account of residents in the notorious Low Track in Vancouver, British Columbia―one of the worst urban slums in North America―who joined together to create an urban farm as a means of addressing the chronic problems in their neighborhood. It is a story of recovery, of land and food, of people, and of the power of farming and nourishing others as a way to heal our world and ourselves.

Michael Ableman is a farmer, author, photographer and urban and local food systems advocate. Michael has been farming organically since the 1970′s and is considered one of the pioneers of the organic farming and urban agriculture movements. Ableman is a frequent lecturer to audiences all over the world, and the winner of numerous awards for his work.